I managed to manually set up a testnet consisting of 2 nodes on different hosts. The nodes connect, and using tezos-client I can successfully import secret keys (import secret key bootstrap1 ${BOOTSTRAP1_SECRET}) and query the node (rpc get /chains/main/blocks/head/metadata).

I am working on alphanet because I could not inject the required protocol on carthage.

My node's config is as follows: 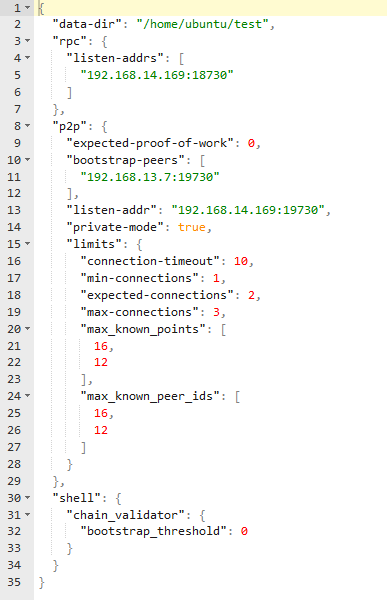 baker waiting for more endorsements in the mempool

I have no idea what is going on there...

The error message is meaningless for a tricky reason (a fixpoint is badly computed leading the error reporting mechanism to raises an error itself: https://gitlab.com/tezos/tezos/-/merge_requests/1376 )

Anyway, the root of your problem is probably that you don't have the right activator key. The public key of the activator is defined line 105 of src/proto_genesis/lib_protocol/data.ml. Be sure it corresponds (on all your nodes) to the key you're using.

Not the answer you're looking for? Browse other questions tagged or ask your own question.

8
Error: Protocol not supported when trying to connect eztz-cli to tezos node
3
Node re-connection problems
6
How can I connect public and private node through a reverse SSH tunnel?
3
Double baking / endorsing is possible while using a single node?
2
How can I make my private node connect to my public node at start-up?
3
How to Connect to Testnet
2
How to prepare a Protocol Change Proposal?
0
Baking tezos-node binary error when baking out of the node
0
How do I setup and run a custom network for testing purposes?